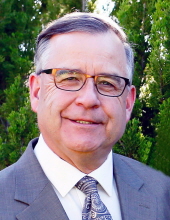 Gene Reich, 69, of Aberdeen, SD passed away peacefully with his wife Janet and his son Matthew by his side early on the morning of September 1, 2020 after a hard fought battle with late stage bladder cancer.

Gene was born to Charles and Hilda (Schilling) on May 31, 1951 in Aberdeen, SD. He grew up alongside his older brother Charlie (wife, Lana) on North State street in Aberdeen. He spent countless hours with his friends playing sandlot baseball at Manor Park and Browns Park. He also spent lots of time hunting and fishing with his brother and father. His love of sport and the outdoors were two constants throughout his life. He told stories about being a child and listening to any radio broadcasts of any baseball games he could get tuned in. Gene also became a Milwaukee (now Atlanta) Braves fan at a young age. The story goes that he felt bad that no one in his family was rooting for the Braves in the ’57 World Series they played against the Yankees and he decided they needed some support. Though he also became a Minnesota Twins fan later in life, his fandom of the Braves never faded over all these years.

Gene graduated from Aberdeen Central High School in 1969. He played basketball and ran cross country and also participated (at best as far as we can tell) in band. He also played baseball for the Aberdeen Smitty’s and grew lots of friendships that he maintained his entire life.

After high school, Gene attended Northern State University. There he played baseball and his senior year, in 1973, he was both an all-district and all-conference shortstop. We’ve heard quite a few (seemingly embellished) hunting stories from this era as well so we know that was a big part of his college life. And based on the fact that he ended up with an Education degree, he must have gone to class sometimes as well. As was a common thread his entire life, family was always a priority. He continued to foster close relationships with his extended family though hunting, bowling league and time spent at the lake. After a short stint as a teacher he decided to pursue his real passion, broadcasting.

Gene graduated from Brown Institute of Broadcasting in 1974. After almost derailing his dream by becoming a manager at a JC Penny’s in Minneapolis (he always told us they loved him there) he got his first job in the industry for KGIV in Huron, SD as a disc jockey. From there he became the Sports Director for KABY TV in Aberdeen, SD. During that time he met Janet Solheim in Aberdeen and they were married in 1978. That same year they moved to Cedar Rapids, IA where Gene was a sportscaster for KCRG TV and covered the Iowa Hawkeyes. After a short stint there, Janet and Gene moved back to Aberdeen, SD and he got a job at KSDN Radio. He eventually became the Sports and News Director where he covered local news and did play by play for both Aberdeen Central and Northern State University athletics. He continued on to KGIM Radio after his time at KSDN. Gene took such pride in broadcasting those games and he also grew many cherished relationships with the coaches and players he met along the way.

During this time Gene and Janet started their own family in 1982 when Matthew was born. Gene devoted so much time to being a father. Playing catch in the front yard, whiffle ball games out back, a quick nine hole holes at Lee Park, or a Sunday hunting trip. He coached little league for years and took Matthew along on many broadcasting trips. He always had time for his son. Family was the most import thing to Gene and that came through loud and clear in the relationship with Matthew.

After about twenty-five years as a radio broadcaster Gene became the Telehealth Coordinator at Avera St. Luke’s Hospital in Aberdeen. There he was instrumental in beginning the Telehealth program that has become so vital to our communities today. As he did with any job he had, he took a lot of pride in the work that he did. And of course he built even more important relationships the he carried through the remainder of his life (a common thread).

Gene retired from Avera St. Luke’s Hospital in 2015. Though he was worried about how he’d spend his time in retirement he pretty quickly found his way. He played lots of golf and became part of a senior’s only (though they broke the rules and let Matthew play one time) group that met every week during the summer at Rolling Hills Golf Course. He really loved that group and we had fun hearing the tales of the rounds he played with his friends. He also spent some time broadcasting NSU and CHS games again. Gene also convinced Matthew to become his color commentator for a couple seasons with the NSU football team. It was a short stint, but time that they both cherished. During this time Gene also became more involved with his church, Zion Lutheran (of which he’d been a member of his entire life). He even made time for a baseball road trip with Matthew and a Baseball Hall of Fame trip with his brother Charlie. It turned out retirement suited him just fine. As Geno might say, “who’d a thunk it”?

Matthew and his wife Leslie (Roark) had their first child, Ada ,in 2018 and it was clear that being a Grandpa was the favorite job he ever had. Though they didn’t get to spend as much time together as we’d hoped, there’s no doubt that he left an impression on his Granddaughter. When he became sick, the daily driver for his battle was the idea of moving to Colorado to be able to spend time with Ada. He didn’t quite make it, but man did he put up a fight.

Gene loved time spent with family and friends, his favorite Atlanta Braves, getting to know the many coaches and players he worked with over the years, playing baseball in his younger years and golf in later years and so many other things I’m sure we’re forgetting about. Though he was taken from us too soon, he lived a full life.

Due to the coronavirus, a small private family service with live streaming will be held on September 3, 2020 at 11:00am at Zion Lutheran Church. A memorial service celebrating Gene’s life is being planned for 2021.

In lieu of flowers, memorials may be directed to:

Thank you from the bottom of our hearts for following us and supporting us with your love and prayers on this difficult journey.

To send flowers to the family or plant a tree in memory of Gene A. Reich please visit our Tribute Store.